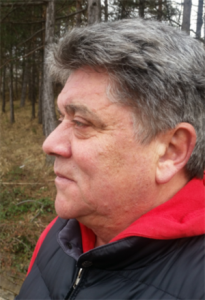 I was born on 13.11.1956 in Mandrica, Ivailovgrad region. Bulgarian, they say. Scorpio. (Are there still people who believe that one-twelveth of the people in the world are similar to each other?). I doubt it.

Due to the fairly mobile and adventurous spirit of my dear parents, I have lived somehow scattered around all the corners of Bulgaria: in Dimitrovgrad, Vidin, later – hereditary I think – in Smolian, Vraca and Sofia. It was interesting of course, but somehow rootless.

Now I spend my time divided between the capital Sofia and a small village in Rhodope Mountains, where I am a proud owner of a villa. I am not going to mention the village’s name, in order to avoid mass scenes of wine drinking and Rhodopean songs. Not that it is a bad thing.

I have completed the so called higher education at the Sofia University „St. Kliment Ohridski“ – Bulgarian philology. Naturally, out of love for literature, not to say aberration. And with the heroic thought that sooner or later, I will become a great writer.

Sooner? Or later? When?

In my wish to shower myself with life experience and wisdon (come on, now!), I have worked all sorts of extraordinary jobs. Actually, I had started those jobs due to a simple bread deficiency, because after my father’s death – he died when he was 33 – the shelves at home somehow became empty. I have been a truck loader (a prefessional one), a builder, a site manager, a mechanic, a skilful producer of the sad Vidin-brand car tyres, a newspaper contributor, a publisher. All sorts of jobs.

I assure you, that was extremelly useful.

At the moment I am an owner of a publishing house and my hair will soon go white because of it. Otherwise, I write. Prose. In a moment I will wave my magic stick and will show you parts of a few books that I have suffered in the last 15 years. (It’s not such a strong word – which one? – because writing prose requires hard work, sitting, groaning and so on.)

They do not need a teacher’s stick. From them is required one very simple thing. They need to get to know that strange animal – the human, to understand its exsitential needs and eternal questions and if possible to „translate“ with clear examples a few important answers. Or at least to show their exmple in a way that will intrigue a few distinguished literature fans, make them think and make them even more persistently ask the question „why am I alive“.

In my opinion, five people are absolutelly enough.

And while I am saying hello – to all five of them – I remain your delighted fan. You know why.